« What Is Good Design? 10 Pluses & Minuses of Vertical Integration »

Why Thinking In Advance Matters

Failures are the proverbial lemons waiting to be turned into lemonade. They are learning lessons and should be stepping stones to success. They are the strikeouts that home run hitter endure and work through.

If your feeling low do to one or more business failures read Magen McArdle’s book, The Upside of Down. On her “buy the book” website,http://meganmcardle.com/buy-the-book/she explains, “. . . just like everyone else who ever lived on the planet, from Alexander the Great to Abraham Lincoln.  Failure is what makes success possible.  It’s how we learn what doesn’t work–and therefore how we learn what does.”

In Fast Company, Stephanie Vozza writes, “Most new businesses fail–that means most entrepreneurs and CEOs fail right along with them. What makes one person pack up his desk and go home while another shakes it off and tries again? People with a fixed mindset believe failure is a referendum on them,” she says. “They think they’re not good enough and maybe they should just go mop floors somewhere. Those who have a growth mindset, however, think failure is a roadmap for what not to do next time.”[1]

She describes five growth-minded entrepreneurs who failed at first and then turned it around:

I found a collection of small business failures in an article by Jamie Kingsberry written for the Business Insider in a piece entitled, 33 Startups That Died Reveal Why They Failed[2]. I spent the time to read about all of the 33 “failures”. I admired the courage and honesty as each entrepreneur described the reasons they believed they failed. My takeaway was that most of them didn’t need to fail or could have seen the failure coming and taken action to avert disaster.

Learn Before Walking Away

At a high level the wrong mix of “let’s just do it” and “let’s study it to death” is the theme of causing or preventing most business failures. I’ve built my own business, MGG Consulting using the principle that more than half of the 71% of businesses that fail can be prevented.

I analyzed each entrepreneurs report about why they believed their venture failed and then aggregated their many comments and stories into “failure reasons.” The reasons divided almost equally between failed execution and poor planning. Not one failure described a cause that could not have been foreseen!

So my belief that “Thinking In Advance Is Your Most Valuable Asset” forces me probe further and ask about the cause and effect “Poor Planning” played in the “Failed Execution.” My questions follow:

We’ll never know for sure to what extent each of the poor planning factors caused execution failure but it’s a safe bet to say that poor planning’s collective affect was significant.

No Need to “Fly Blind”

The 9-Step process designed by MGG Consulting takes you through your future income and expense venture twice IN ADVANCE: Once to establish and assure your strategy and another time to assure your tactical execution. It’s all about building a sustainable business platform from which to launch value and thrive in the market. 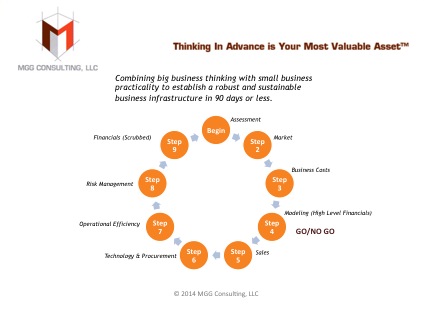 Flying blind with little or no planning is reckless. Don’t do it.